Today, Gentle Reader, please join me in welcoming the wonderful bustlepunk extraordinaire M.K. Hobson to my blog. I have asked her to come by for a spot of tea.

A while back some of you may recall I read and reviewed her novel, The Native Star. The first in a series. I described it as,

“A delightful Gaslight Fantasy romp set slightly later in time than The Parasol Protectorate series and in, as you may have gathered, the heathen Americas. It features parochial upstart witch, Emily Edwards, and the deliciously named Dreadnaught Stanton.” 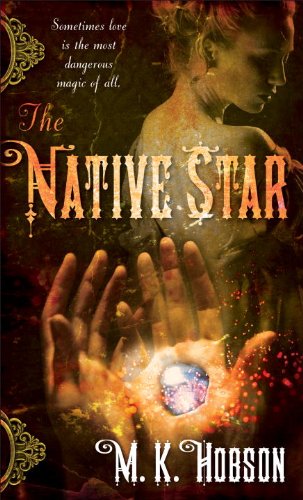 Since then she produced the second book in the series: The Hidden Goddess. And now she strikes out on her own with the third book, The Warlock’s Curse. 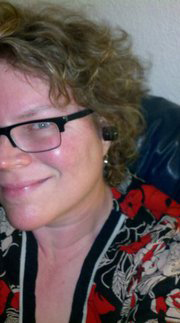 About M.K. the Author:

Tea or coffee and how do you take it?
Coffee. Venti Americano with heavy cream, every morning at 8:03 a.m. from a cute barista named Patrick.

Describe your personal style for author appearances.
I have an unswerving spiritual commitment to live as much of my life as possible in pajamas. Or, failing that, in clothing that approximates pajamas while not transgressing the bounds of human decency. So—loose black tunic over leggings. When in public, however, I do eschew my slippers in favor of my almost-as-comfortable-but-nowhere-near-as-fuzzy Doc Martens.

If I were to observe the writer beast in its native environment, what surprising thing might I see? What does the environment look like?
You would find absolutely nothing surprising in my environment. It is like every other writer’s environment. It is quiet, cluttered, and dark. Upon entering, one detects the subtle stench of despair and perversity. Everything is coated with a fine, orange, cheeto-flavored film. There is a long black USB cable plugged into the front of my computer which powers my eHookah, on which I puff as I write. This is much healthier than smoking an actual hookah, or so I am reliably informed by the Internet.
*I must interjects that I too have a secret love of cheetos.*

If you drive, what do you drive?
I do not drive. I am driven. In a luxurious 1992 Suzuki Grand Vitara that my driver calls “the runt.”

No deviating: vanilla or chocolate ice cream on a plain or a sugar cone? (Gail will use this to determine your level of sanity.)
I reject your false dichotomies! I am not on trial here! But since you asked, let’s logic this through together, shall we? The cone question is easily dispensed with—a mere bagatelle, really. Plain cones (I assume you mean those cake cones, like you get soft-serve in?) are an abomination. But then, chocolate or vanilla? Ah, that is a far stickier wicket! As a flavor qua flavor, vanilla’s superiority is unquestionable. But one tires of it quickly. And you did not specify whether the hypothetical sugar cone in question bears a single or double scoop. If it’s a single scoop, then clearly, that’s not enough ice cream to get tired of—and in that case, vanilla is the clear choice. But if it’s a double scoop, I’ll take chocolate. With sprinkles.
*ooooo, a challenge. I pronounce you sane-ish, with possible over-analytical tendencies, a bit of a duel personality, and decidedly abnormal inclinations.*

What’s most likely to make you laugh?
Absurdity with a dark, brutal undertone. The humiliation of the vain and the casting down of the arrogant. I find the most humor in tragedy. I’m kind of like God that way.

Since writers inevitably end up in the bar, what’s your poison?
Double vodka soda with a twist of lime. If someone else is buying, I’ll order two at a time. The idea is to have a sufficient quantity of good hard booze to tide you over until that damn waitress makes it back to your table, which probably won’t be until half-past-never with the service in this place.

M.K. Hobson’s debut novel, The Native Star—the first book in her Veneficas Americana series—was nominated for a Nebula award in 2010. She lives in the first city in the United States incorporated west of the Rockies. Her favorite writers are Theodore Dreiser, Sinclair Lewis, Booth Tarkington, Gore Vidal, and William S. Burroughs. The Warlock’s Curse is her third novel. You can find out more at her website, www.demimonde.com 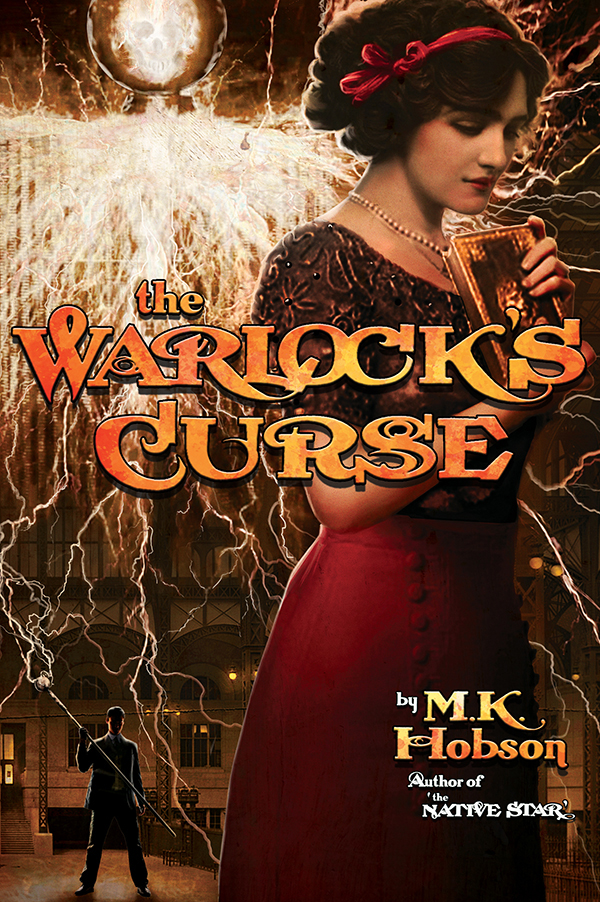 About The Warlock’s Curse:

What should readers eat while consuming your novel?
Apple pie. Delicious, delicious apple pie. There’s a surprising amount of pie-business in this book. Probably because I really like pie. Dammit, now I want pie.

What form does evil take within its pages?
The poison of revenge, the absence of forgiveness, and the desire to hurt people who have hurt you. Karmic evil, basically.

Which one of your characters would you most want to kiss and why?
My main characters are 18 and 17 respectively, so even speculating on that would just be creepy and probably illegal in some states. But I’d happily give Nikola Tesla a big ol’ smooch, just to see him go all “ew ew ew …!” and wipe his mouth with a sanitized hankie.

What’s your favorite period in history and does it influence your world building?
I don’t have a favorite period in history as much as I have a favorite place. America. The good ol’ US of A. I am an unabashed sucker for cornball Americana— Fourth of July fireworks, marching bands, apple-pie eating contests, extraordinary rendition, judicial corruption—you know, all those things that make this country great.

Which one of your characters would you most like to slap and why?
My lawyer advises me that I should not answer that until I have a clearer understanding of the context in which said slapping would take place.

Without spoilers, what’s the funnest (or funniest) part of the book?
There’s a scene where my main character, Will Edwards, gets pressured into signing a contract in blood. It’s a lot funnier than it sounds. I don’t know, I guess I just find contract signings hilarious or something.

If your story smelled of something, what would that be?
Detroit in winter—snow and steel and red brick, the cold wind off the river and smog-grimed snow. And blood. And apple pie.

The Warlock’s Curse
THE YEAR IS 1910. Eighteen-year-old Will Edwards has landed a prestigious apprenticeship at Detroit’s Tesla Industries, the most advanced scientific research center in the United States. It’s a plum prize for a young man who dreams of a career in the new science of Otherwhere Engineering.
But his father doesn’t want him to go. And he won’t tell him why.
Determined to get there by any means necessary, Will finds unexpected support along the way. His old friend Jenny Hansen—daughter of a San Francisco timber baron—is eager to help him for reasons of her own. And so is his estranged brother Ben, who he hasn’t seen in over ten years.
But running away turns out to be the easy part. On the first full moon after his eighteenth birthday, Will is stricken by a powerful magic—a devastating curse laid upon his ancestors by the malevolent sangrimancer Aebedel Cowdray. Will must find a way to control the magic that possesses him—or the vengeful warlock’s spirit will destroy everything and everyone he loves.

Quote of the Day:
“Books are delightful society. If you go into a room and find it full of books – even without taking them from the shelves they seem to speak to you, to bid you welcome.”
~ William Ewart Gladstone