A conflagration of necessary posts puts this one a little late this month, Gentle Reader. I’m hoping that vacation and travel means a few of you have more reading time in December for I have chose two fun books for you.

What are they? Regency-set pieces where girls disguise themselves as boys.

Newt’s Emerald by Garth Nix. I think the powers-that-be have this one listed as YA or New Adult gaslight fantasy, which is fine with me. I read it thinking it was adult. Either way, I enjoyed this fun lighthearted story, so I picked it for my December reread. Hopefully this is a new book for many of you and you will like it as much as I did.

Blurb:
Inspired by the works of Georgette Heyer and Jane Austen, Garth Nix’s Newt’s Emerald is a Regency romance with a fantasy twist.
After Lady Truthful’s magical Newington Emerald is stolen from her she devises a simple plan: go to London to recover the missing jewel. She quickly learns, however, that a woman cannot wander the city streets alone without damaging her reputation, and she disguises herself as a mustache-wearing man. During Truthful’s dangerous journey she discovers a crook, an unsuspecting ally, and an evil sorceress—but will she find the Emerald?

I’ve also added in Ridiculous by D.L. Carter to this month’s read-along. Imagine, if you would, an Alexia-like young lady who has to cross-dress and pretend to be Lord Akeldama. Then falls in love with a duke. This novel is way more romance than it is any other genre, but I enjoyed that it had a great deal of humor. I also like an intense nookie scene on occasion. This is not YA, unless you want your teen getting An Education. Why did I pick this as well? I think the two books complement each other. Also, this one has a lower price point, and I know many are stretched over the holidays so I wanted to give you the option of something less spendy.

Blurb:
Identity theft regency style. After the death of her miserly cousin Antony North, Millicent Boarder is determined her family should never be poor or vulnerable again. To protect them she conceals her cousin’s death and assumes his identity. Now she must face the Ton and the world as Mr. North and accept the price she must pay for her family’s safety — she will never be loved.

“Oh, him. He dare not express an opinion,” said Millicent. “If he states his favorite color is polka dot and his favorite music is bagpipes played by a drunk, then we should have a whole tribe of inebriated, polka dotted, bagpipe-playing débutantes staggering down Bond Street the next day.”
~ Ridiculous by D.L. Carter 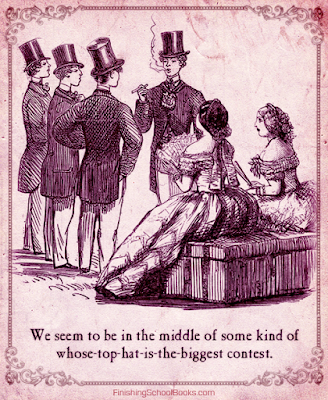 Quote of the Day:
And my only daughter, for whom I had dreamed such a wonderful future, is engaged to be married to an inebriated newt fancier.
~ Right Ho, Jeeves by P. G. Wodehouse