There will be no more Parasol Protectorate books.

The thing is, Gentle Reader, I’ve never ended a series before. I’ve ended plenty of stories, somewhere in the vicinity of ten novels, and two masters thesis, but Timeless will be the first time I’ve ever completed an entire run of books. As it came time to finish Timeless, I realized I had no idea how to do this. So I did what any good scientist would do, gathered data, and researched how other people did it.

Most of my favorite books are fantasies and space operas from the 1980s and 90s. Thank goodness these have endings.

I can’t draw on urban fantasy because, while many of them are in series form, few have actually bothered to end yet. And there aren’t a lot of comedic books in self-contained series, so fantasy would have to be my model. Nevertheless, from what I could tell, regardless of fantasy, sci-fi, comedic, or alternate history, there seems to be two acceptable ways to end a series.

Even if the books aren’t really romantic. This can be a reunion of long lost lovers, or a marriage of two we’ve been following all along, or simply an intimate moment between wife and husband after a long slog through many pages.

2. A Cute Moment of Character.

By this I mean a character being, doing, or saying something pithy and totally within personality designed to leave the reader with a friendly feeling and a smile on her face. 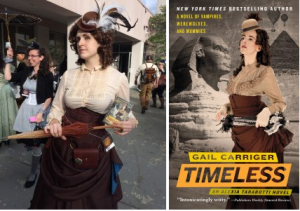 There is also the standard high fantasy poetical ending, but I didn’t really count this as I only found one or two stand alone novels that went with that approach. And really, can you imagine what a poetical ending for my books might be?

And Alexia stood in the doorway of doom,
while her husband got naked by the light of the moon,
and Lord Akeldama pretended to swoon,
and Ivy put on a hat like a spoon.

I bet you want to know which approach I went with.

I did spend some time considering the matter. I was inclined to go with neither. But would readers feel somehow betrayed by this? Is there an expectation of either option A or B? That is the question. In the end (pun intended) it happened quite naturally and I am really rather pleased with the final note of the book. 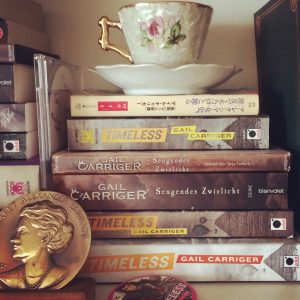 Book News:
Timeless gets its first review. And quick on its heels comes the second.

“And so the soldier: hung up his sword;
The hands that had hewn: turned to heal.
The loves she had lost: became different loves,
And the Martlet made: his mansion in the eaves.
The wolf-cub waited: by the wall of the house
And the people of the sea: sang them to sleep.”

~ Mary Brown, The Unlikely Ones

Tags: Behind the Magic, Important For Authors, Parasol Protectorate, TIMELESS