If you, Gentle Reader, do not follow my movements with care and precision, then allow me to say that I was at the Singapore Writers Festival a few weekends ago. Here is a little bit about it.

First things first, I was invited to the Tanglin Club for lunch. I thought it would be with one very nice fan, Min, but it turned into a group. Which is cool, I mean, why not? This is the kind of thing that just sorta happens to me. It’ll likely get me killed or whatnot, but what a way to go!

In this instance it turned out to be one of the highlights of my trip. A delicious lunch, but even better, the most wonderful company. I had so much fun and learned a great deal about Singapore. So off to a good start.

For the Singapore Writers Festival I had a Q&A session, a signing, and a master class (very important sounding) on the Gothic origins of steampunk and everything else. A lot more than that happened: there was insane food (a whole blog post to come), super nice people, character cosplay, ministers of state, and national newspaper articles. And I had no idea of any of it (except maybe the nice people and the food) going in.

So the first thing that happened was my handler, Lyra, told me we had to go a little early to my first event, because a minister of state wanted meet me.

Yes, she was serious, an honest to goodness minster of state wanted to meet… well, me.

So I was all: Oh dear what did I say on Twitter?

Turns out the lovely Sim Ann is Singapore’s Senior Minister of State at the ministries of Culture, Community and Youth and Trade and Industry and, coincidentally a fan of the Parasol Protectorate series.

Cue Gail quietly going utterly bonkers in her own head.

I mean, for real?

HOW DID THIS BECOME MY LIFE?

She arrived in the most adorable suit (yes, of course, I noticed) with assistants and a reporter and a camera-man in tow. I signed her books in the greenroom and quietly went mental. And then she stayed for my Q&A. 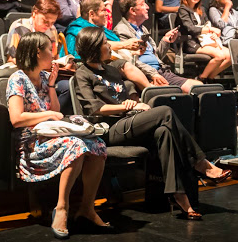 Then I had a Q&A. Aside from kaffeeklatsches Q&As are my favorite thing to do at any event. Likely because talking about myself is hard to bungle. I can’t make any mistakes, after all it’s a subject I know a great deal about. Still, after what had just happened in the greenroom I was a bit giddy. 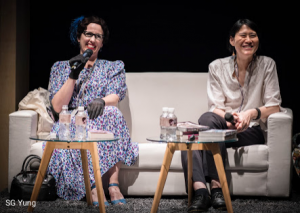 How can you tell a giddy Gail from a regular Gail?

Yeah, I don’t know either.

I was interviewed by the lovely and extremely well prepared (not easy with me, since there is so much about me online) Khoo Sim Eng. We had a delightful time. I opened my big mouth far to often, but that’s kinda my thing. In my defense, I was in Singapore, jet lagged, having just met a major local politician.

Turns out my big mouth kept going because I ended up in the Straits Times, Singapore’s main English language newspaper, the next morning.

Because hey, why not? 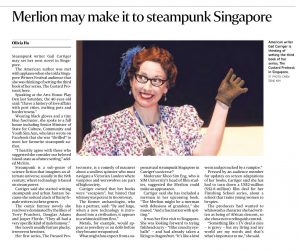 Make a few jokes about a Merlion…. and there my ridiculous self is, in a major newspaper. Because I have an endless capacity for bizarre comedy and sticking my (admittedly well-heeled) foot in my mouth

I ask you again: HOW IS THIS MY LIFE?

Ah-hem, where was I?

There was a fantastic Alexia and Ivy cosplay. 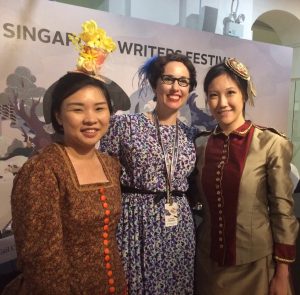 (Let us be clear in the fact that they are wearing full Victorian dresses in Singapore humidity, 1 degree off the darn equator. Amazing.) I’ll post more pictures of these to the wikia and to my fashion blog. Promise.

The next day I taught an hour long class on the Gothic roots of commercial fiction. Okay it was basically a lecture. Yes, I still do lectures. No, I don’t do them often. 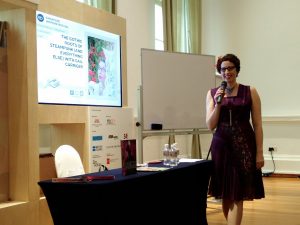 The hour went pretty quickly and there were lots of excellent questions. I do like teaching people who actually want to be there. Then everyone bum-rushed the notes (I should have planned hand-outs) and I got to chat with Chris for a bit. Chris and I met in Melbourne at World Con, and I was trying to persuade him to come to San Jose for World Con 2018.

Everyone should come to San Jose for 2018. It’s going to be so good.

Then Lyra took me on a bit of a walking tour, and I went to a delicious lunch with the Festival organizers and talked to a Gothic lit writer out of the Manchester, who probably could have done a better job at the Master Class than me, and that was that.

Here is a fun wrap up video of the festival (FB native, may not work for everyone).

And here’s a link to the surprise FB live video I dropped from Singapore on YouTube. It’s not synced great but it’s me chatting at you in a kinda summation of this blog post.

More on Singapore to come!

{Gail’s monthly read along for November 2016 is Romancing the Inventor by Gail Carriger. Oh don’t look so shocked.} 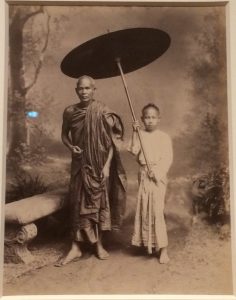 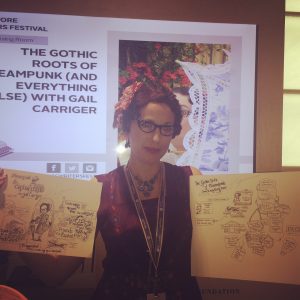 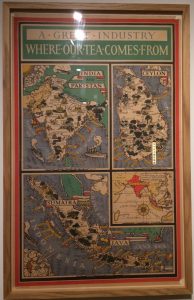 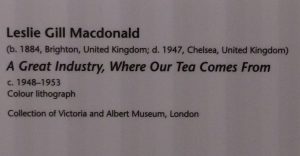 “There’s no such thing as writer’s block. That was invented by people in California who couldn’t write.”
~ Terry Pratchett

Etiquette & Espionage made this list of Fantastic books and why you’d read them.

“Who would give a law to lovers? Love is unto itself a higher law.”
~ Boethius, The Consolation of Philosophy, A.D. 524