Some time ago, Gentle Reader, a dear friend gifted me with a teapot carrier AKA carriage cozy. 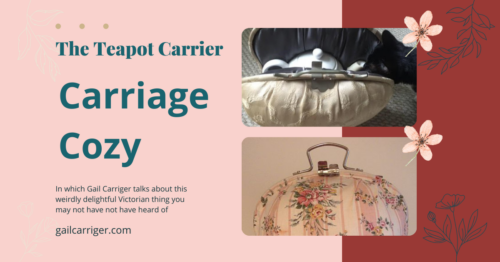 At first, when I saw it I was confused. Why would she give me one of those 1950’s hair dryer cases?

Then I opened it up and inside was a perfectly nested teapot!

I thought, “My my my, Primrose would LOVE this!” 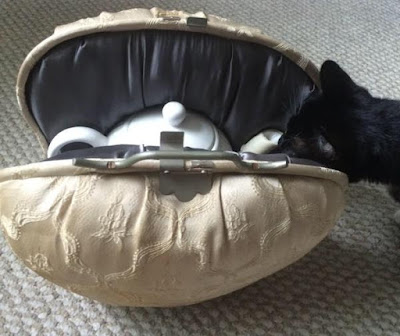 The teapot is modern, from Cost Plus, but I believe it came with the carrier when she bought it at the Alameda Antiques Fair.

Whenever I tweet about this carrier it gets lots of attention and interest, so I thought I would do a little research. Because I have a deadline, and a book I should be writing instead, why not investigate tea carriers?

The Relevant Tea Leaf has a blog post on the tea cozy including a mention of carriers.

“I’ve read different accounts for its use.   The term ‘Carriage Cozy’ came about because it carried the tea and  teapot by carriage – perhaps to a picnic.  It is said servants also used this cozy to carry the tea and teapot  from the downstairs kitchen to  their employers upstairs.  The cozy made transport easier, protected the porcelain teapot, and most importantly it kept the tea warm.” ~ Phyllis Barkey

Apparently, these carriers are still made in Holland.

It is hard to see how they would be useful if filled with tea at the time of transport. Surely it would slosh out and dampen the interior of the case? Perhaps they came with is a cap or cork for the spout?

The Tea Blog of the English Tea Store has a discussion on cozies too. They refer to this specific style of cozy as the Western Style Carriage Cozy.

“A style of traveling, or carriage, cozy that may be more familiar to Western tea drinkers is fashioned of cloth on a metal or wood frame, with a handle and a clip to hold it closed. The teapot is nestled into the deep padding.  These may have been used as far back as Victorian times for carrying tea to friends’ homes. Nowadays tea drinkers probably don’t carry them much further than the back yard. I’ve used mine a couple of times and it’s very efficient at keeping tea hot, although somewhat awkward once on the table.” ~ teaguide

MilnerMercantile on Etsy refers to their listing of a carriage cozy as Vintage item from the 1960s. I wouldn’t be surprised if mine is also from around that time period. It doesn’t have the feel of being much older (I’ve my materials archaeologist hat on when I say this). And while mine is in much worse condition (one of the reasons I don’t mind using it) it has the same clasp, handle style, and general shape as the above example.

This hatbox shaped one turned up on Etsy and sold for $43. So they do seem to become available eventually.

The following carriage cozy is listed as being from the 1930s. I do love the little feet. But I am beginning to question the dates on these puppies as they seem all over the place.

While this one below was listed as a Victorian Horse Carriage Teapot Cozy or Caddy. 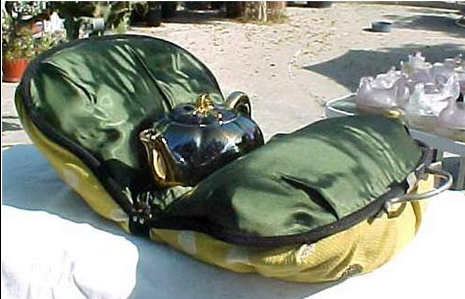 Again the clasps and styles are all so very similar that the archaeologist in me seriously questions the dating on these cozies. I’d love to see an advertisement in a dated magazine, or a fashion plate or photograph or something showing these with a sustainable date and provenance. Although in the closed position they look so much like a large purse or hatbox it would be hard to find due to miss categorization, methinks. That said, in all my research into Victorian times and travel journals I have never seen image or mention of a carriage cozy. (My research being confined to 1830-1900.)

Yes, they look Victorian, and the temptation is to want them to be from that time period but I think it more likely that they are post turn of the century at the very least. Although the lined wicker/basket ones certainly can be earlier.

The above is listed as 19th/Early 20th Century and that certainly correct to dating the pot inside it. Ceramics I do know a thing or two about.

It looks like you can snap this red one up right now for $43 out of Canada, if you like. Look at the little cap for the spout! 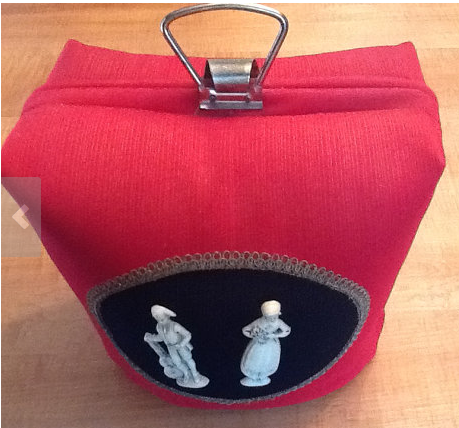 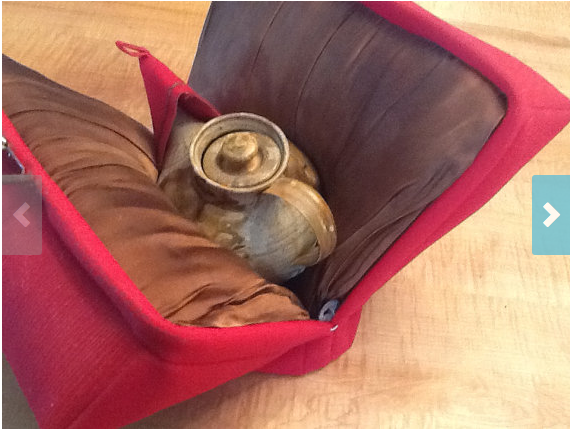 “In good vintage condition this teapot carrier was used in days gone by to keep tea warm while traveling in a carriage or going to a picnic. There is a small matching accessory that goes over the spout so the tea doesn’t spill. Clean condition. Metal closure. Stands about 14 ” with handle. About 12″ wide and 10″ deep. Unique conversation piece. Tea pot not included.”

Your Tisane of Smart . . .
8 Crazy Facts about Octopuses 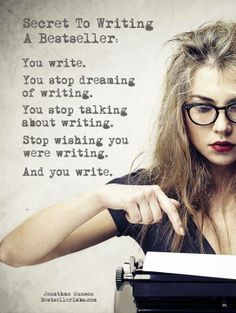 “One of the drawing-rooms was ‘draped’ in a way that was quite painfully aesthetic, considering the paucity of the draperies. The flower-pot were draped, and the lamps; there were draperies round the piano-legs, and round the clock; and there there were not draperies there were bows, all of the same scanty description. The only thing that had not made an effort to clothe itself was the poker and by contrast it looked very nude.”